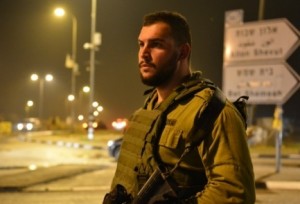 An IDF corporal identified as Cpl. T. who has only been serving for eight months has successfully prevented two Palestinian terrorist attacks in less than two weeks—one on Thursday evening, when he shot and killed a terrorist who tried to stab Israelis waiting at a bus stop in Gush Etzion, and another last week, when he shot two terrorists who stabbed another soldier on duty nearby. The soldier was moderately wounded in the attack.

On Thursday, a terrorist later identified as Malak a-Sharif, 25, from Chevron, approached the bus stop and was spotted by the soldiers on duty, who launched the protocol for stopping a suspect. When Sharif pulled out a knife and poised himself to attack and stab them, he was shot and killed.

Cpl. T., who is assigned to the Kfir Brigade’s Shimshon Battalion, said, “While I was guarding the intersection [in Gush Etzion], we discerned the suspect and called out to him to cross the street and come toward us. When he reached us, he pulled out a knife, intending to stab my friend who was with me. That same moment, I cocked my gun and shot him.”

The previous incident took place Oct. 27, when a terrorist stabbed another Kfir Brigade soldier, leaving him with moderate wounds. Cpl. T. happened to be nearby the attack and responded rapidly. He shot and killed two terrorists, preventing what could have been a far worse attack. The terrorists were later identified as Shadi al-Kudasi and Izzedin Abu Shahram, both from Chevron.