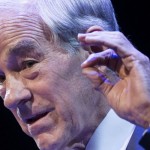 Ron Paul disagrees with his potential presidential candidate son, Rand Paul, on many issues but says it’s “too early to tell” whether his views will hurt Rand’s candidacy.

“I don’t think so, it’s too early to tell,” Paul said today. He’s not even an announced candidate. I don’t think that’s the case.”

Paul has defended Putin’s role in the Ukraine conflict and said that the U.S. is “every bit as involved and who knows, maybe more involved than Putin is.”

He has also questioned the emerging narrative about who is responsible for the attack on MH17, saying that the media “will not report that neither Russia nor the separatists in eastern Ukraine have anything to gain but everything to lose by shooting down a passenger liner full of civilians.”

The younger Paul, meanwhile, has distanced himself from his father’s views and reached out to neoconservatives. Read more at Buzzfeed.