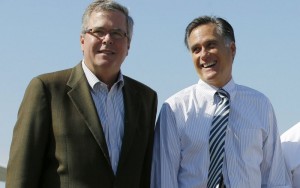 In a Washington Post report looking back on this year’s GOP primary race on Sunday, Mitt Romney opened up about a private meeting with Jeb Bush over his doubts about the Republican presidential candidate’s ability to beat Hillary Clinton.

Romney recalled telling Bush, “Jeb, to be very honest, I think it’s very hard for you to post up against Hillary Clinton and to separate yourself from the difficulty of the W. years and compare them with the Clinton years.”

He said Bush responded by saying that he planned to make the “campaign about the future instead of the past.”

In recounting his decision on whether to run in 2016, Romney said he wondered, “Am I loved? Am I written off? Am I despised? What does the Republican base think about me?”

Romney also blamed Bush adviser Mike Murphy, who worked on his 2012 campaign, of “fanning the flames” in casting doubts over his 2016 candidacy. Murphy said this allegation was “absolutely not true.” Read more at the Washington Post.