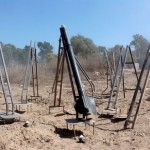 One man sustained moderate shrapnel wounds when a rocket hit a parking lot in Beersheba. One of the projectiles fired at the Eshkol Regional Council landed just outside a kindergarten. The children were unharmed, but several parked cars were damaged.

According to Channel 2, Israeli Air Force jets struck a terror target in the Nuseirat refugee camp in central Gaza around noon on Friday. At least two people were reportedly killed and several others were wounded. Also on Friday, Israel opened the Kerem Shalom border crossing, allowing humanitarian aid into Gaza.

On Thursday, the Israeli cabinet approved the Israel Defense Forces’ request to call-up 10,000 reservists. The reservists recruited at this time will relieve reservists that have been on active duty for the past few weeks. The IDF also bolstered the troop deployment near the Israel-Gaza border, placing them on defensive alert.