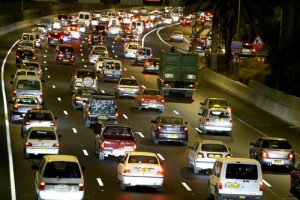 Honk. Honk. Hoooonk. It’s the sound of the Israeli street.

Israelis have a reputation for aggressive driving, no doubt. But according to the 2014 Road Safety Annual Report, 263 people lost their lives on Israel’s roads in 2012, a 40-percent decrease from the number of accidents causing death in 2000.

“There has been a real increase in the awareness of the need for road safety,” says Dr. Victoria Gitelman, a researcher at the Transportation Research Institute of Technion – Israel Institute of Technology in Haifa.

So what has changed?

First: public transportation. According to Dr. Tal Oron-Gilad, a tenured associate professor in the Department of Industrial Engineering and Management at Ben-Gurion University of the Negev (BGU), there has been a major shift toward Israelis increasing their use of public transport. In urban areas such as Jerusalem, the establishment of the light rail has reduced city traffic. Paving lanes that are exclusively dedicated to public transportation has improved travel time, in addition to encouraging the use of public buses or carpooling by cab.

“This is not just a slogan, it is a real change in priorities,” Oron-Gilad tells JNS.org.

That being said, there’s also a slogan. A decade-long Ministry of Transportation campaign to “calm the traffic” in Israeli residential areas has resulted in a nearly complete eradication of pedestrian casualties in those areas, says Gitelman. The campaign involved adding speed bumps and sidewalks, and reducing residential speed limits. Roundabouts (known as traffic circles in the U.S.) have also played a role in improving safety.

Another major factor has been Israel’s investment in infrastructure upgrades. A 2014 Bank of Israel study that looked at the impact of road improvements found that guard rails dividing oncoming lanes of highway traffic reduced the number of accidents by 32 percent. Sophisticated technologies, such as rumble strips and forgiving roadside designs that include soft shoulders (unpaved areas beyond the paved carriageway), have helped mitigate the consequences of run-off type road accidents where the vehicle leaves the road and enters the roadside. The result, says Gitelman, is a reduction in the number of fatalities and serious injuries resulting from these events.

That same Bank of Israel study found that sharp turns increase the number of accidents by as much as 21 percent. The addition of tunnels that cut through the mountains and remove the ups, downs, and curves in areas like the entrance to Jerusalem off Highway 1, as well as the entrance to Haifa “is changing driving dramatically,” says Oron-Gilad.

“These tunnels are very expensive, but obviously it is a lot faster and safer if you don’t have to drive around a mountain, but through it,” she says.

A final major shift has been Israel’s policy of checking for drunk drivers. For decades (Gitelman says until the 2000s), there was a popular belief that alcohol-induced traffic accidents were not a trend in Israel. But when officials started to measure the number of alcohol-related traffic incidents, they found that “we do have a problem,” Gitelman says. As such, traffic police now dedicate a certain amount of time to this issue, with random checks, especially on holidays and weekends. In that area too, notes Gitelman, there have been positive results.

The more Israel learns, the more it can take action, researchers argue. Several Israeli universities have entire departments focused on ways to improve traffic safety. This past May and June, for example, BGU professors published two separate studies related to improving driving conditions. In May, BGU researchers and students released a sophisticated lifesaving mobile app that classifies drivers based on their driving style and phone usage while driving. The system uses a smartphone’s sensor to collect and store multiple types of data on driving in the cloud, which is then analyzed and provided to the user. It provides an opportunity for remedial training and awareness of one’s driving style and level of addition to the smartphone while driving. The hope is that reducing how much drivers text while behind the wheel could help in fighting a growing and dangerous pandemic.

The second study addressed the contributing factors of music to traffic violations and human error. In his book, “Driving and Music: Cognitive-Behavioral Implications,” BGU professor Warren Brodsky explains, “The research is irrefutable that listening to music in the car affects the way you drive….Ideally, drivers should choose tunes that do not trigger distracting thoughts, memories, emotions, or hand-drumming along to the beat.”

“Imagine a road, you have two directions: north and south,” says Gitelman. “Usually, that road is divided into two parts. Now, if you build an additional lane dedicated to public transportation, and then you divide that section into two parts, there are now four parts and the arrangement is much more complicated. A pedestrians needs to cross all of these components and when crossing needs to look left, right, left, right— or sometimes right, right, left. Unfortunately, this also has its expression in accidents.”

In Tel Aviv, where the weather is more welcoming to pedestrian commutes, there has been a successful thrust for use of bikes instead of cars. But without bike lanes, says Oron-Gilad, people are getting hit.

Oron-Gilad adds that she thinks Israel sometimes falls short in strategic planning. When the country built the much-anticipated Highway 6, it failed to make the shoulders wide enough or add enough rest stops to make it safe for truck drivers or regular commuters. Additionally, Oron-Gilad says that as Israel has built up its road system, it has neglected the periphery, where some of the country’s most dangerous highways lay.

“People—especially tourists—think of Israeli driving as what happens in Jerusalem or Tel Aviv. But there are many other areas that need to be attended to,” says Oron-Gilad. “If we bring the train to a city like Sderot or Netivot or Ofakim, you will bring hope to these people because they can access jobs and have more possibilities.”

Nevertheless, while it may seem easier to drive in the U.S.—where roads are wider and there is plenty of parking (depending on the city)—Oron-Gilad believes that things are not so bad in Israel. She says, “Israeli drivers are no different or worse than other drivers around the world.”