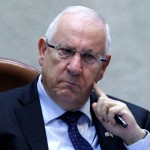 “As long as I am President, I will never let the murderer go,” Israeli President Reuben Rivlin stated this evening at a ceremony in memorial of the assassination of the late Israeli Prime Minister Yitzchok Rabin marking 20 years since Rabin’s murder.

“I stand here today as President of the State of Israel as one who belongs to an opposing camp, the other that represents the opponents of Oslo,” Rivlin noted. “As someone opposed to the ways of Yitzchok Rabin, it is possible to say for sure about him that G-d will rise up his blood like one who took part of him for eternity. And I say here and announce 20 years later, let my right hand be forgotten if I will sign amnesty for that cursed man.”

“20 years after the murder, we need to ask if we are doing enough in order to seal the breach that broke out by the hands of the murderer,” Rivlin asked rhetorically. “Are we doing enough to imprint the consciousness of the nation throughout the generations again and again regarding the destructive power of political violence,” Rivlin wondered.

The ceremony was held in the presence of Shimon Peres, Rabin’s family, Israeli Opposition Leader Israel Herzog, and others. The memorial ceremony took place at the President’s home. A special memorial ceremony will also take place tomorrow at Mount Herzl and in the Knesset.