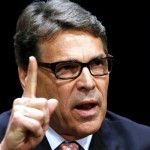 “Let no one be mistaken—Donald Trump’s candidacy is a cancer on conservatism, and it must be clearly diagnosed, excised and discarded,” Perry said. “…He offers a barking carnival act that can be best described as ‘Trumpism’: a toxic mix of demagoguery, mean-spiritedness and nonsense that will lead the Republican Party to perdition if pursued.” Read more at the Washington Post.