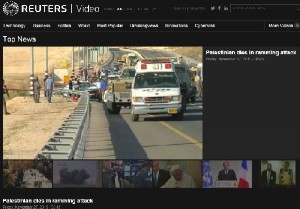 Throughout the wave of Palestinian terrorism that began two months ago, the mainstream media has frequently turned truth on its head by reversing the roles of perpetrator and victim, of assailant and defender. Reuters joins the crowd with a recent headline about a Palestinian from Ramallah who attempted to kill IDF soldiers at a bus stop before being halted by a fatal bullet.

The headline: “Palestinian Dies in Ramming Attack” provides no clue that the Palestinian was the perpetrator of the “ramming” attack, and instead turns him into the victim. Other more objective sources reported that the perpetrator, Fadi Hasib — whose brother had, just days ago, used the same ram and stab tactic – – had plowed into a group of Israeli soldiers waiting for a bus, hurling one over the guard rail and wounding two. The perpetrator then exited his car presumably to stab the soldiers, much like his brother had tried to do. But as he ran toward his victims, he was shot and killed by a volunteer officer.

And that is how the wire service Reuters joins those in the mainstream media who skew the news.

UPDATE: Following written complaints about the skewed headline, it was changed to the following: “Palestinian rams car into Israeli soldiers, is shot dead”.