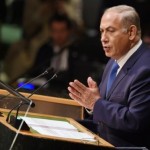 A day after U.S. Secretary of State John Kerry criticized Israeli policies in an interview with The New Yorker, Prime Minister Bibi Netanyahu asserted that it is the Palestinians, not Israel, who are at fault for the current diplomatic stalemate.

“It is time that the international community understands that the reason there are no negotiations and no progress toward peace is not because of Israel, it is because of the Palestinians,” Netanyahu said in Beer Sheva.

“Repeated, multiple polls in the Palestinian Authority have demonstrated that 75 percent of the [Palestinian] public rejects the two-state solution and about 80 percent condone stabbing attacks [targeting Israelis],” he said, adding that those numbers are “not surprising since [Palestinian Authority President] Mahmoud Abbas continuously persists in inciting and spreading untrue propaganda about Al-Aqsa [Mosque] and untrue propaganda about [Israeli] executions [of Palestinians] and rejecting any genuine attempt to negotiate.”

In a profile of Kerry in The New Yorker, the secretary of state wondered about the future character of Israel.

“Will it be a democracy? Will it be a Jewish state? Or will it be a unitary state with two systems, or some draconian treatment of Palestinians, because to let them vote would be to dilute the Jewish state? I don’t know,” Kerry said. “But the problem is, neither do they (the Israelis). Neither do the people who are supposed to be providing answers to this. It is not an answer to simply continue to build in the West Bank and to destroy the homes of the other folks you’re trying to make peace with and pretend that that’s a solution.”