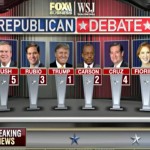 Republican presidential candidates urged greater confrontation with terrorists, a clampdown on immigration, and, in one case, a change in French gun laws, all while slamming President Barack Obama, following Friday evening’s terror assaults in Paris.
The attacks killed 127 in bombings and shootings that French authoritiestermed an “act of war” by the group Islamic State, also known as ISIS or ISIL.

“Boots on the ground would be important, because throughout that whole Middle Eastern region we have been calling for a coalition of the people who have a vested interest,” Ben Carson, by some measures the Republican’s current 2016 front- runner, told reporters in Florida Friday night.

Along with a number of his Republican presidential rivals, Carson also said the U.S. should not accept refugees from the Middle East, according to the Washington Post. Many of those refugees are fleeing the Islamic State, particularly in Syria, but opponents of accepting them say terrorists may have infiltrated those trying to escape the violence.

The Syrian passport found next to the body of one of the Paris suicide bombers was registered on the Greek island of Leros in October, suggesting that the holder entered Europe as a political refugee, Greek authorities said today.

“Our president wants to take in 250,000 from Syria, Donald Trump, who vies with Carson as the leading candidate among likely Republican voters, said Saturday during an appearence in Texas. I mean, think of it, 250,000 people. And we all have heart, and we all want people taken care of and all of that. But with the problems our country has, to take in 250,000 people, some of whom are going to have problems, big problems, is just insane. We have to be insane.”

Obama has pledged to bring 10,000 refugees from Syria, although reports in recents days suggested the administration was looking to increase that number.

“We need to consult closely with our NATO allies who may be targeted for additional attacks,” Cruz said. “We need to immediately declare a halt to any plans to bring refugees that may have been infiltrated by ISIS to the United States. We need to redouble our efforts to prevent ISIS agents from penetrating our nation by other means.”

“Those who are fleeing persecution should be resettled in the Middle East in majority-Muslim countries,” Cruz said later, adding the attackers were likely to target the U.S. as well. “Now on the other hand, Christians who are being targeted for genocide, for persecution, Christians who are being beheaded or crucified —we should be providing safe haven to them,” Cruz said.

Republican candidates were also quick to condemn Obama’s approach to fighting terrorism, and pounce on comments in an interview due to air in full on Sunday citing “some progress” in fighting Islamic State.

Trump on Friday tweeted: “We need much tougher, much smarter leadership – and we need it NOW!” He also bashed Obama’s approach to the Islamic State. “President Obama said ‘ISIL continues to shrink’ in an interview just hours before the horrible attack in Paris. He is just so bad! CHANGE,” Trump tweeted.

https://twitter.com/realDonaldTrump/status/interview taped on Thursday for ABC News’s This Week, portions of which aired Friday morning, Obama said the U.S. has “contained” the Islamic State from making territorial gains in Syria and Iraq.” He said the group was not “gaining strength,” and added, “what we have not yet been able to do is to completely decapitate their command and control structures.”

Former Arkansas Governor Mike Huckabee called in a post on his website for revoking “any agreement with Iran regarding their nuclear capacity.” Iran’s Shia leadership has battled the Sunni Islamic State, but, Huckabee said, “radical Islamists, whether Sunni or Shia, are a clear and present danger to civilization.”

In two tweets, Florida Senator Marco Rubio said the U.S. “must increase our efforts at home and abroad to improve our defenses, destroy terrorist networks, and deprive them of the space from which to operate.”

Later Rubio’s campaign released a video in which the candidate called the attack “a wake up call to the fact that what we’re involved in now is a civilizational conflict with radical Islam.”

Kentucky Senator Rand Paul, who has often stood alone in the Republican field in opposing increased foreign intervention, said Rubio blocked an amendment Paul offered that would have created additional restrictions on immigration from countries with “large jihadist movements.” The proposed amendment was to a bipartisan immigration bill that Rubio helped to author.

“Unfortunately, Marco and Chuck Schumer had a secret deal to block all amendments,” Paul said Saturday on a radio show, referring to Rubio and a powerful New York Democratic senator who was part of the bipartisan group pushing the immigration legislation.

Former Florida Governor Jeb Bush, who has cautioned his fellow Republicans against harsh rhetoric towards immigrants, told conservative radio host Hugh Hewitt he was “not surprised” by the attacks. “This is an organized effort to destroy Western civilization,” Bush said. But rather than calling for tighter immigration laws, he urged the U.S. to fortify alliances, strengthen links with European intelligence, and “engage in the Middle East to take out ISIS.”

Ohio Governor John Kasich, who led a New Hampshire crowd in an impromptu prayer on Friday night when news of the attacks broke, said in a statement the U.S. should invoke the mutual defense article of the North Atlantic Treaty, increase collaboration by intelligence agencies with allies, and “stem the flow of refugees into Europe” by creating “safe havens for civilian refugees on Syria’s borders.” He did not mention refugees seeking entry to the U.S.
He also said he would work with “European, Turkish, and Sunni Arab allies to contain and ultimately defeat ISIS in its homeland.”

Speaking Saturday Carly Fiorina planned to say she was “mostly… angry” at President Obama and Hillary Clinton, who was Obama’s former secretary of state until 2013 and is now the Democratic presidential front-runner.

“I am angry that Barack Obama and Hillary Clinton declared victory in Iraq in 2011, abandoned all our hard-won gains for political expediency and contrary to the advice of our generals, thus leaving vast swaths of territory and too much weaponry to be gobbled up by ISIS,” the former Hewlett-Packard CEO planned to say in one part of the speech at Florida Sunshine Summit gathering of Republicans, according to an advanced text sent by her campaign.

At the same gathering, New Jersey Governor Chris Christie also indirectly blamed Obama, saying that the attacks showed that “the world is desperate for a strong, secure, smart, and tested American president.”

South Carolina Senator Lindsey Graham said in statement that “there is a sickness in the world that has to be dealt with, and the civilized world must come together to confront it. America should lead that unity.” Graham, a member of the Senate Armed Services Committee, has urged the U.S. to lead a coalition of ground troops in Syria.