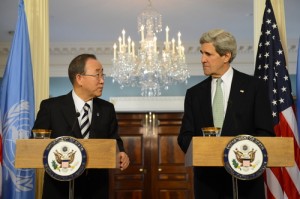 The 72-hour cease-fire deal, one of 11 cease-fires violated by Hamas during the recent Gaza conflict, ended when Palestinian terrorists emerged from a tunnel opening and attacked an IDF Givati Brigade infantry patrol in Gaza.

While the U.S., the U.N., and Israel said Hamas violated the cease-fire, Hamas leader Khaled Mashaal claimed the terror group never accepted the deal’s principle of restraint against Israeli forces inside Gaza during those 72 hours. In retrospect, Israeli officials confirmed that Mashaal in fact never promised to accept the IDF presence in Gaza, despite U.S. and U.N. assurances to the contrary.

An Israeli official told Army Radio on Tuesday that Israel had “asked the Americans for two things: a cease-fire and full freedom to act against the tunnels, without the threat of Hamas opening fire.”

“We asked for a written document that Hamas accepts these conditions and we indeed [received that], along with public media declarations,” the official said.

At the time, Kerry told reporters that Israel and the Palestinians were prepared for a 72-hour cease-fire without conditions, and a spokesman for the U.N. secretary-general said the IDF would maintain its positions inside of Gaza.