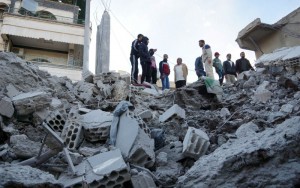 Quoting witnesses and activists, the Amnesty International report accuses Moscow of using cluster bombs, which can kill civilians long after clashes cease, in attacks over the the past few months.

The report focuses on six attacks in Homs, Hama, Idlib, Latakia and Aleppo between September 30, when Moscow formally joined the conflict, and November 29.