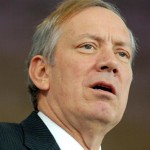 And now he’s headed off stage, according to the Boston Globe, which reported that Pataki was contacting supporters in New Hampshire that he was leaving the race.

Pataki has averaged 0 % in polling, according to RealClearPolitics. He was ranked 12th out of 13 in this week’s USA TODAY GOP Power Rankings.