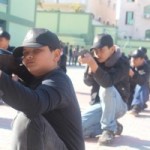 A number of Hamas operatives who were arrested and detained by Israel during Operation Protective Edge admitted to the use of civilian establishments, such as mosques, schools and hospitals, as covers for terrorist activity, according to a report released on Monday by the Israel Security Agency (ISA).

The report cites extensive and detailed testimony from the Hamas members to support Israel’s long maintained assertion that the group operates behind human shields, which often accounts for civilian casualties as it exchanges blows with the Jewish state.

The report came as the Hamas controlled Gaza religious affairs ministry claimed Israeli fire throughout Monday destroyed four mosques, raising to 71 the alleged total number of mosques targeted over the past seven weeks.

Detained militants Muhammad Ala’a and Muwaz Abu Tim told ISA they were recruited for Hamas military activity at the Alabrar and Khaled Ben Alulid mosques in Khan Yunis and Bani Suheila, respectively. Another militant, Abdel Rahman Balousha, said the Alsafa and Alabra mosques in Khan Yunis serve as meeting points for Hamas terrorists. He added that in the Alabra mosque the assembly point is in an underground shelter.

Iyad Abu Rida said that the Hamas-affiliated Jamaat Asnad association is located on the second floor of the Altikva mosque in Hazara while another Hamas operative said terrorists used the same mosque to pass along orders regarding where to plant improvised explosive devices to target Israelis.

Another pair of Hamas terrorists said armed police activity was carried out adjacent to the Uthman ibn Ifan and Abdallah ibn Masoud mosques in the Alkheif junction area, the Hassan Albana and Abu Dir mosques, and the Haroun Alrashid school.

Another detainee, Muhammad Ramadan, told ISA that in February 2014 he trained as an anti-tank fighter in a hall located underneath the Alshafi mosque in his hometown of Khan Yunis. He added that the hall is also used as a training and instruction facility for the Izzadin Al-Qassam Brigades, Hamas’s military wing.

Khan Yunis native Muhammad Alqadra told ISA that mosques in his hometown were used to conceal war material such as RPGs, heavy PKC machine guns and AK-47s. Additionally, he confirmed that local schools and hospitals, including the Nasser and Halal hospitals, are used as weapon arsenals. It is also well known that senior Hamas leaders and their armed bodyguards, who usually wear police uniforms, use hospitals as hideouts, he said.

According to Alqadra, guards are stationed at the admission department in the Nasser hospital in Khan Yunis. He also believes the Hamas leadership in the Gaza Strip, including senior official Ismail Haniyeh, is hiding in Gaza City’s Shifa hospital in an area closed off to civilians and guarded by plainclothes armed men.

One operative remembered delivering food to his brother, who works for a local terrorist organization, while the latter was hiding in the Nasser hospital.

A different Hamas operative told ISA he believes terrorists are hiding in the Alnajar hospital. He claimed that in July 2013 he saw many terrorists in the three-story hospital building, adding that civilians who needed medical treatment were turned away from the medical facility. Yet another operative said that since the start of the current Israel-Gaza conflict, many armed policeman have been blocking off certain sections of the same hospital and not allowing anyone, including members of patients’ families, to enter.

The report also cited terrorists admitting to digging terror tunnels and rocket launch sites, and placing arsenals near kindergartens in the Gaza Strip. Muhammad Abu Daraz, from Greater Ibsan, said he was stationed in a tunnel that started next to a clinic adjacent to a residential dwelling. He added that there is a kindergarten in Hazara, next to a clinic, to where he was ordered to bring prisoners in the event of a kidnapping.

ISA said information it gathered from the various Hamas terrorists was passed on to the Israel Defense Forces, including warnings about launch sites, attack tunnels and infiltrations, arsenals and booby-trapped access routes.

The report is among the most extensive yet on Hamas’s endangering of civilians in combat and use of civilian structures for military purposes.

Throughout Operation Protective Edge, media reports of the Hamas tactics trickled out of Gaza, but were often later retracted for fear of retribution from Hamas.

After journalists began to leave Gaza a more complete picture began to emerge, with some outlets reporting on rocket launchers in densely populated civilian areas and the Foreign Press Association condemning Hamas’s intimidation of foreign journalists.

In conclusion ISA said: “It is clear from the foregoing that Hamas knowingly and intentionally operates in and adjacent to civilian areas, including in kindergartens, hospitals and mosques in order to carry out military activity. Hamas thus endangers the civilian population even in times of calm given that munitions are liable to go off and put lives at risk. During fighting, Hamas deliberately operates in these locales, thus turning the civilian population into human shields on the assumption that Israel will be blamed for any injury and loss of life.”