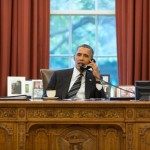 President Barack Obama “will do everything in his power” to prevent Congress from voting on a nuclear agreement with Iran if one is reached by the Nov. 24 deadline, The New York Times reported.

“Even while negotiators argue over the number of centrifuges Iran would be allowed to spin and where inspectors could roam, the Iranians have signaled that they would accept, at least temporarily, a ‘suspension’ of the stringent sanctions that have drastically cut their oil revenues and terminated their banking relationships with the West, according to American and Iranian officials,” the report said. “The Treasury Department, in a detailed study it declined to make public, has concluded Mr. Obama has the authority to suspend the vast majority of those sanctions without seeking a vote by Congress, officials say.”

Reacting to the report, House Foreign Affairs Committee Chairman Ed Royce (R-Calif.) said Monday, “In July, I led a bipartisan letter to the president-signed by over 340 Members of Congress-calling for ‘greater consultation with Congress on a potential sanctions relief package that may be part of a final agreement.’ That extensive engagement hasn’t come, even as the administration is considering such hugely consequential national security decisions.”

Sen. Mark Kirk (R-Ill.) was quoted by The New York Times as saying, “Congress will not permit the president to unilaterally unravel Iran sanctions that passed the Senate in a 99 to 0 vote.”