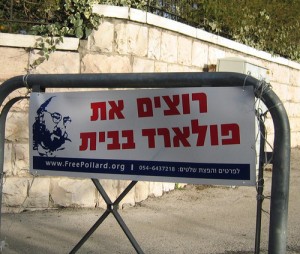 After spending three decades in a U.S. federal prison, Israeli spy Jonathan Pollard will be set free on Friday. Israel Hayom reported Thursday that Israeli Prime Minister Bibi Netanyahu has asked U.S. President Barack Obama to let Pollard move to Israel immediately after his release. Netanyahu made the personal request during his meeting with Obama at the White House last week in Washington, DC.

Under the reported parole terms, Pollard, 61, will not be allowed to leave the U.S. for the next five years. Seeking to have that restriction lifted, Netanyahu reportedly promised Obama that Israel would make “guarantees” regarding Pollard’s post-release behavior and that a special Israeli team would be established to enforce any terms set by the Americans.

Obama did not say yes or no to Netanyahu’s request, leaving Israeli officials with the impression that he was considering the matter. As things stand, Pollard will need to report regularly to a parole officer. It has been reported that Pollard will live in New York City and that he has secured a job there. It remains unclear whether Pollard will receive any financial aid or other form of assistance from the Israeli government following his release.