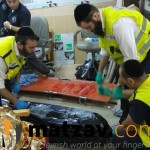 The current wave of Arab terror has continued for over three months, and has kept up a steady pace of attacks which often occur multiple times per day.

So far, Arutz Sheva reports, there have been close to 1,000 security incidents since the middle of September when the attacks began. Of those, 296 incidents included injuries or fatalities. 29 Jews have been killed and 491 injured, of whom 342 have been civilians.

Analyst Nechemia Gershuni Eliyahu of Walla! News organized the statistics, which include attempted car-ramming attacks, shootings, firebombings, stabbings and arrests of those carrying knives, attacks are based on a nationalistic background, and rock-throwing attacks wherein there were injuries on any level.