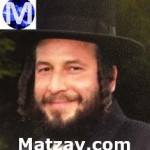 Newsday reports that investigators have uncovered DNA evidence linking R’ Menachem Stark z”l to a van that police seized earlier this month in the investigation of his abduction, according to a law enforcement source familiar with the case.

The light-colored van was grabbed by police about two weeks ago after they spotted it on a street in Brooklyn. A person who was about to enter the vehicle when police approached willingly surrendered it to investigators and was not arrested. Police found the new evidence after examining the vehicle’s interior, said the source, who didn’t want to be named.

Newsday reports that the new evidence appears to be a significant development for police, who have been using a variety of forensic and technological advances to try to piece together what happened to R’ Menachem after he was forced into a van outside his office on January 2.