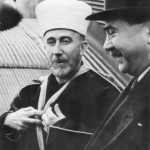 A veteran Israeli journalist recalled on Friday that research he conducted in 1968 revealed a plan by Jerusalem’s World War II -era grand mufti to build a crematorium in Samaria.

As part of his research on Grand Mufti Haj Amin al-Husseini’s actions in 1942, when the Jewish community in then-British Mandate Palestine was preparing for the possibility of a Nazi invasion, Haviv Kanaan met with Faiz Bay Idrisi, a senior Arab officer in the Mandate Police.

According to Israel Hayom, Idrisi told Kanaan — whose findings were the basis for an article that appeared in Haaretz in 1970 — that the mufti “was gearing to enter Jerusalem at the head of the Muslim Arab Legion squadron he’d created for the Third Reich. The mufti’s plan was to build a huge Auschwitz-like crematorium in the Dotan Valley, near Nablus, to which Jews from Palestine, Iraq, Egypt, Yemen, Syria, Lebanon, and North Africa would be imprisoned and exterminated, just like the Jews in the death camps in Europe.”

Al-Husseini was appointed grand mufti in 1921. A speech he gave in August 1929 resulted in mass anti-Jewish violence and the killing of dozens of Jews by Arab mobs. After Hitler rose to power, the mufti sent a message to the German envoy in Jerusalem expressing support for the new Nazi regime and in return he received funding from the Nazis, Israel Hayom added.

The report follows a controversy sparked last week by Israeli Prime Minister Benjamin Netanyahu during an address to the 37th World Zionist Congress in Jerusalem, where he said the grand mufti had “instigated” the Nazi genocide of Europe’s Jews. The prime minister claimed that Hitler had originally intended to expel, not exterminate, the Jews, but that the Nazi leader changed his mind following pressure from al-Husseini.

Author Wolfgang Schwanitz, who penned the book Nazis, Islamists, and the Making of the Modern Middle East, also argued that the Islamist leader was a central figure in inspiring the Holocaust.

“It’s a historical fact that the grand mufti was an accomplice in this,” said Schwanitz, as cited by Israel Hayom. “He was the top non-European adviser to Hitler on the process of eliminating Europe’s Jews. It would be absurd to discount the mufti’s role in encouraging Hitler and other Nazi officials to carry out the final solution.”

White House Deputy Press Secretary Eric Schultz on Thursday addressed Netanyahu’s remarks about the mufti’s role in the Holocaust. He said there is “no doubt as to who was responsible for the Holocaust,” and added that “inflammatory actions and accusations” from both sides of the Israeli-Palestinian conflict could fuel the current violence.

“This needs to stop,” he said.