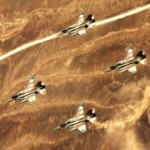 According to the report, the targeted storage facilities housed long-range surface-to-surface missiles that Syria had transferred to the Hezbollah terrorist group. A number of Hezbollah fighters and Syrian military soldiers were reportedly killed in Saturday’s strike and members of Iran’s Revolutionary Guard were reportedly among the wounded.

The same report said it was the third Israeli strike in the Qalamoun region over a period of one week. Israel declined to comment on the report.