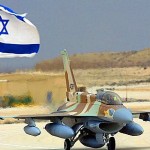 [See update here.] An Islamist group affiliated with the Islamic State of Iraq and Al-Sham (ISIS) has claimed the capture of an Israeli pilot inside the Dara’a Governorate’s western countryside in Syria on Motzoei Shabbos.

The group, “Liwaa Al-Shahada” (Martyrs Brigade), is currently engaged in a fierce battle with their former allies from the Free Syrian Army (FSA) and the Syrian Al-Qaeda faction “Jabhat Al-Nusra” in this region of western Syria.

According to social media activists from the Syrian Opposition, the Israeli pilot allegedly ejected from his aircraft after losing control of it.

UPDATE: It appears that a 23-year-old Israeli Arab crossed the border into Syria using a paraglider on Shabbos in order to join one of the terror organizations fighting in the country, it was cleared for publication on Sunday morning. The IDF made no attempts to stop the Jaljulia resident in flight, and he was picked up by someone on the Syrian side after landing. See the story HERE.