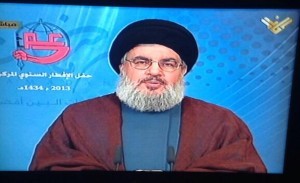 Footage of the speech, which he delivered to supporters in a predominantly Shi’ite enclave south of Beirut, revealed details of the composition and modus operandi of his elite security detail, according to PZM.

Though the address — in honor of the Islamic Ashura holiday — was not remarkable (it contained the usual tirades against the United States and Israel) — the video was significant, according to Israeli intelligence analyst and Intelli Times blogger Ronen Solomon. Solomon, who has been observing Nasrallah’s security detail for years, said the video exposed elements of three circles of protection around the Hezbollah leader.

The first is Nasrallah’s personal protection unit, made up of many bodyguards, selected from Nasrallah’s family members and trained in Iran — and possibly also in North Korea.

The second is comprised of snipers, spotters and undercover bodyguards. It provides the first circle with logistical support.

The third consists of an elite Hezbollah guerrilla unit, which clears and secures areas in which Nasrallah moves, with roadblocks, checkpoints and other strategic measures.

Keeping abreast of Nasrallah’s methods of protection is key to Israel, which has targeted the Hezbollah leader for years, according to PZM.