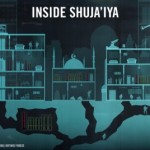 The sources told WND that most of the extra-judicial killings of suspected collaborators took place during a brief “humanitarian” cease-fire last Thursday. Hamas blamed the killings on Israel saying they took place four days earlier, in Shuja’iya, on Gaza’s northern border with Israel.

The murdered Gazans were accused of leading Israeli troops to smuggling tunnels and providing intelligence on Hamas’ infrastructure inside Gazan cities, according to the sources.

According to WND, the sources also said “the civilian suspects murdered by Hamas were publicly celebrated by Hamas as martyrs killed by the Jewish state.”

The Israel Defense Forces described the  residential neighborhood of Shuja’iya, a mile from the Israeli border, as a “fortress for its weapons,”publishing declassified aerial photos showing how rockets were hidden in mosques, hospitals, playgrounds and cemeteries, as well as a cut-through diagram showing how a mosque and two adjacent buildings, connected by tunnels that extend to the Israeli border, was used as a depot for Hamas rockets.

The IDF said that, as well as the proximity to the Israeli border, the density of tunnels and weapons is due to Shuja’iya also being a battleground between Hamas and the Palestinian Islamic Jihad, with their internal turmoil in Gaza brewing since 2007.

“Both terrorist organizations have spent the past seven years actively trying to increase their influence in the neighborhood,” the IDF said. “The rivalry has created an arena in which each organization strives to be regarded as the leaders in the fight against Israel. This has resulted in the neighborhood’s deterioration from a civilian residential area into a terrorist fortress.”

The IDF said it had warned civilians in Shuja’iya to evacuate, by “dropping leaflets, making phone calls and sending text messages,” although many ignored Israel’s warnings after Hamas instructed them to stay put.

Israel lost 13 soldiers in Shuja’iya. Hamas claimed 66 Gazans died, but according to WND’s sources 25 of the dead were Gazans who were shot by Hamas as collaborators.

Last week, during  a humanitarian ceasefire in Shuja’iya, Canada’s The Globe and Mail reported seeing Hamas militants disguised as women, with one concealing his weapon in a baby’s blanket “as if it were an infant.”

“The presence of militant fighters in [Shuja’iya] became clear Sunday afternoon when, under the cover of a humanitarian truce intended to allow both sides to remove the dead and wounded, several armed Palestinians scurried from the scene.”

“Some bore their weapons openly, slung over their shoulder, but at least two, disguised as women, were seen walking off with weapons partly concealed under their robes. Another had his weapon wrapped in a baby blanket and held on his chest as if it were an infant.”

The Globe and Mail also confirmed that the IDF warned civilians to leave, but Hamas instructed residents to ignore the warning:

“While the Israelis had warned citizens two days earlier to leave, many had refused in large part because Hamas said it expected people to remain.”

The WND article was flagged on Sunday on the Elder of Ziyon blog, where one reader commented on the report of the collaborators being killed, saying, “They were probably killed by Hamas for being rivals of Hamas.”

“That’s how this terror regime Hamas runs things,” he said. “If they use their own people as human shields, imagine what they do to people who criticize them.”