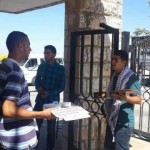 Israeli news website, Kooker, on Thursday posted undated German footage, apparently shot in Gaza, and possibly in recent days, of what it said were Hamas enforcers violently beating and coercing residents to remain in their homes and the vicinity, despite their pleading that the IDF called on them to evacuate the area.

The Israeli army has repeatedly said it sends alerts, delivered by leaflet from the air, SMS text and voice messages, and live calls to cellphones, to Gazans to clear an area prior to bombing or otherwise assaulting a suspected Hamas or terrorist stronghold.

The IDF has also said that Hamas terrorists routinely encourage locals not to heed the warnings, using the civilians as human shields.

In the video, armed enforcers, some wielding batons, are seen beating and punching recalcitrant residents, and, at several points turn on the camera crew, and try to cover the lens.

Some of the dialogue in the video is also telling:

(1:29) Interviewer to man in black shirt: “Are you afraid? Man: “I’m more than 90 percent sure that this is not a real event. Normally, I don’t have a lot of fear about this, but when they tell us to get out, then we’ll do it together.”

Narrator: “Hamas police are pushing back against the protesters.” (Police seen trying to break up a prayer session)‏

Enforcer to protesters: “You’re always getting in our way!”‏

‎Security official: “What are you saying? We’re not the Jews!”‏

Woman: “You can go beat the Jews more! We are not bad people; what have you done here?”