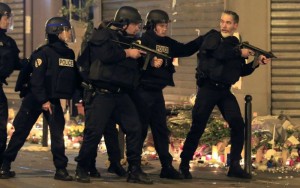 An anti-terrorism operation linked to Friday’s deadly attacks is underway in the northern Paris suburb of Saint-Denis, where officers have exchanged gunfire with several suspects who appeared to be holed up in an apartment, according to French media reports.

Several police officers have been reportedly injured but the severity of their injuries is unknown, the AFP confirmed.

Witnesses described “heavy gunfire” and said police are blocking off the nearby area.

Citing police sources, French news channel BFMTV reported the main target of the raid was Abdelhamid Abaaoud, the suspected mastermind behind the Paris attacks who was believed to have been in Syria.

The other two men police are seeking inside the building are believed to be Salah Abdeslam, who authorities have sought since Saturday, and an unidentified “ninth attacker” police identified in video footage on Tuesday. Read more at the Guardian.