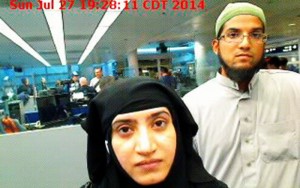 Syed Farook, one of the shooters who killed 14 people in San Bernardino, had ties to a group of jihadists in California who were arrested in 2012 for trying to join al Qaeda, according to a CNN report citing the FBI.

Investigators are specifically interested in a man named Sohiel Kabir, who was sentenced to 25 years in prison for being a recruiter who radicalized the others involved in the plot. Read more at CNN.