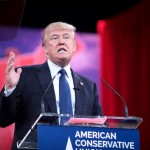 Some Democrats are losing faith that their presidential front-runner Hillary Clinton can win in a general election fight against Donald Trump, the fierce-tongued GOP front-runner who already has obliterated many of his opponents in his own party.

Early polls indicated Clinton would easily defeat Trump in a November head-to-head matchup, but a more recent Rasmussen poll shows the two in a statistical tie.

According to The Washington Times, some of Clinton’s supporters still believe she can best a Trump candidacy, but others fear her past provides too much grist for Trump, who already has gone after her husband, former President Bill Clinton, for his past with women, and has said Hillary Clinton is partially to blame for the creation of the Islamic State (ISIS) because of her time as President Barack Obama’s secretary of state.

“We’re going to start to have to look at how the [Democratic] candidates play against Donald Trump, because he’s certainly holding onto his lead in the Republican Party, and he has certainly played the Republican candidates in a way that has hurt some of his opposition, and I think people are going to start asking, ‘All right, who’s going to stand up under his type of campaigning?'” David Allen, a Democratic Party leader in Barnstead, New Hampshire, told the Times.

“If Bernie [Sanders] is the candidate, Trump will play up how un-American socialism is, and if Hillary gets it, he will dig up everything in the past 40 years and use it — and won’t mince words in using it,” Allen said.

There also isn’t a lot of excitement behind Clinton’s campaign as there is for Trump’s, other Democrats told the Times.

“Hillary is so familiar, she’s been around forever,” Ron Romine, chairman of the Democratic Party in Spartanburg, South Carolina, told the Times. “She has her supporters, and they’re going to go out and vote for her, so there’s not a whole lot to parse out. You either like her or you’re not enthusiastic.”

Some Clinton supporters think Trump is actually helping her by taking away the media spotlight.

And supporters of Bernie Sanders, her main Democratic foe, aren’t overly excited about switching their allegiance if she is the eventual nominee.

“I just don’t trust her,” Montgomery County, Iowa, party leader Jason Frerichs, told the Times. “She’s pivoted on too many issues important to me. I’m 38 [and] earn $45,000 a year. How can she understand what my life is like? She’s a millionaire. She’s a career politician. I just don’t see much excitement for her outside the baby boomers, who think it’s her time.”

It’s not the first time Clinton has been seen as the party’s leader, only to see her White House hopes fade. In 2008, she famously went from front-runner to losing the nomination to an up-and-comer named Barack Obama.

Sanders looks to be less of a threat than Obama was eight years ago, but Clinton is hurting herself with attempts to pander to minorities.

First, there was as post on Clinton’s campaign website titled “7 things Hillary Clinton has in common with your abuela (grandmother).” That brought social media backlash of pandering to Hispanics.

Next, she changed her Twitter avatar from its red, white and blue “H” to a red, black, and green altering of the “H” to look like kinara, the candle holder used at Kwanzaa.

“The Democratic front-runner needs to show she really gets what black and Hispanic voters want — and that doesn’t mean giving your Twitter feed a Kwanzaa makeover,” wrote Barrett Holmes Pitner at The Daily Beast.