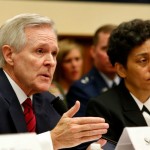 Representative Duncan Hunter is not pleased with Navy Secretary Ray Mabus’s push to end the ban on women in combat positions, telling Politico that Mabus is “a greater threat to the Marine Corps than ISIS.”

A Republican from California, Hunter served in the Marine Corps and fought in both Iraq and Afghanistan.

Hunter took issue with a memo Mabus issued earlier this week calling for the integration of boot camps and the creation of gender-neutral job titles. Read more at Politico.