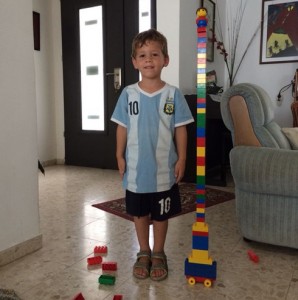 Daniel Tregerman, the 4-year-old boy was killed in a Gaza mortar attack on Israel late on Friday afternoon as he played in the living room of his family home, was laid to rest this morning.

The rocket struck a nearby car in the southern Sha’ar Hanegev region critically injuring Daniel with shrapnel. He later died of his wounds.

According to the IDF, the projectile was fired from nearby the grounds of a school run by UNRWA in the Shejajiah neighborhood in Gaza City.

Magen David Adom paramedics attempted to perform CPR on Daivd, but their efforts failed. Five others were lightly wounded in the attack.

“On behalf of the citizens of Israel, I express deep sorrow and send condolences to the family of the child,” Netanyahu said. He also warned that Hamas “will pay a heavy price for this terrorist attack.”

Itzik Bar-or, a medic for Israeli volunteer ambulance service United Hazolah told Israel’s Walla News that he was the first to treat the child.

Bar-or, who lives close by said he heard the explosion near his house and immediately went outside. Hearing cries for help he ran to the scene of the attack with a first aid kit.

He said he found the boy in a nearby house and that he had incurred severe head injuries. Shortly afterwards MDA and military medical teams arrived and later determined the child’s death.

The child’s parents and siblings were inside the house at the time of the attack, Bar-or said.

In response to news of the death, U.S. Ambassador to Israel Dan Shapiro condemned the attack in a Facebook post.

“I’ve just heard the terrible news that a 4-year-old child was killed by a mortar strike in the south,” he wrote. “I condemn in the strongest terms this outrageous terrorist attack and offer condolences to the boy’s family. Israel has the right and obligation to defend itself, which the United States supports.”

David was the first Israeli child to be killed since the beginning of Operation Protective Edge.

Gila, his mother, spoke at the levaya and said, “Daniel my sweetheart, I cannot believe I am here now, saying goodbye. We were the happiest family in the world, and I just cannot come to grips with it. We wanted to say thanks, you taught us how to love and you gave us some much joy. I find solace in the fact that you were a loved and happy child until your last minute.

“We wanted to protect you but even the code red siren failed to save you. You would always run first and call your little brother (to the shelter) and then in a second it ended.

“We don’t want to say goodbye. You are the love of my life, the perfect child, every parent’s dream: Smart, sensitive, ahead of his age group and beautiful, so beautiful.”

President Reuven Rivlin also attended the ceremony, and said, “We dreaded the moment more than anything. We saw preschools suffer hits and abandon bikes and we knew the terrorists have no regard for the blood of their children would not spare our own.

“He was too young to cross the street by himself because it was dangerous, but old enough to know the Code Red siren means because that too is dangerous; he was stilling learning the alphabet but knew the difference between a shelter and mortar, between an interception and a hit, between birds chirping and the rockets shrieking.

“I think of a flower growing here, with its stem being cut. Cut be an evil hand, cutting a life and smile that will never be seen again. I think of a mother and father, and brother and sister who lost their sibling, their son. They lost you Daniel, the most precious of things in the world.”

Daniel’s parents, Gila and Doron, had left their home in the south due to constant rocket fire from Gaza, but decided to return just a few days ago partly on the promise of security officials, including Chief of Staff Benny Gantz who said that residents of the south would be safe.

Then the ceasefire with Hamas collapsed into violence and rocket fire on Tuesday and the Tregerman family found themselves at the wrong place at the wrong time.

The whole Tregerman family was at home when the mortar was fired on Friday. The children played and the parents made plans to leave the kibbutz later in the day.

When the code red sirens sounded, the parents sprung into action and got their two youngest children into their shelter, but Daniel was still outside when time ran out, and the mortar struck.

Gila is the spokesperson for the Merchavim Regional Council and Doron works as a landscape architect.