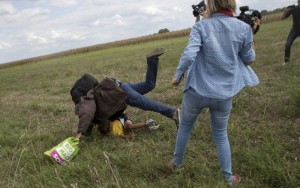 The Hungarian camerawoman who was caught on video kicking refugees plans to sue one of them, a man who fell while carrying a child.

Petra Laszlo maintains that she kicked the refugees, including children, out of fear, and says that Osama Abdul Mohsen has changed his story from what he initially said.

“My husband wants to prove my innocence,” Laszlo said. “For him, it is now a matter of honor.” Read it at Metro UK.