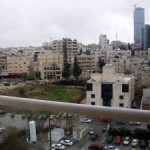 Jordanian students were apparently shocked to discover a mention of neighboring Israel, by name, in a college-level geography textbook, The Jordanian Times reported on Friday.

According to the report, a paragraph in the 2015 edition of the University of Jordan national geography textbook, written by several Jordanian scholars, read: “… Aqaba Gulf plays an important role in geopolitics between Egypt, Saudi Arabia, Jordan, and Israel, for its proximity to Arabian oil fields.”

The line apparently irked some students who felt it promoted normalization with Israel, and failed to mention Palestine or the Palestinian territories while mentioning the Jewish state by name. Generally, in publications in the Arab world, Israel either goes unmentioned in maps, or is called Palestine. In Arab media, Israel is often referred to as “the Zionist entity.”

Aqaba, a Jordanian city on the Red Sea, shares a border with the Israeli city of Eilat. Jordan and Israel have enjoyed full diplomatic relations since 1994, when a peace treaty ended decades of hostility.

Fakher Daas, an organizer for the National Campaign for Defending Students’ Rights in Jordan, told the English-language Times: “We are not used to seeing a book at Jordanian universities that recognizes the Zionist entity and the state of what is referred to as ‘Israel’.” One student told the paper that he and fellow classmates were in shock and noted that it was the first time Israel appeared in their curricula.

Co-author Ziyad Makhamreh said students need to separate their opinions from the reality that the state of Israel is recognized by the UN. Yusra Husban another of the book’s co-authors, said “Israel” would probably be replaced in the 2016 edition with “Palestine” or “the occupied territories,” according to the report.