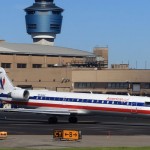 A plane was diverted for a second time this week over a seat-recline figh. A Paris flight bound for Miami was forced to land at Logan International Airport in Boston after Edmund Alexandre, 61, of Paris became enraged when the passenger in front of him reclined her seat. When a flight attendant tried to calm him down, Alexandre proceeded to chase him down the aisle.

An air marshal cuffed Alexandra and he was arrested at the airport. Alexandre faces federal and state charges for interfering with the American Airlines crew.

On Sunday, a similar dispute over a seat recline forced a plane flying from Newark to Denver to land in Chicago. Read more at The Boston Globe.