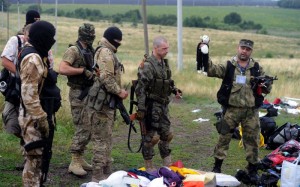 Pro-Russian separatists have mobbed the crash site of Malaysia Airlines Flight 17 in eastern Ukraine and are removing and destroying evidence that would be critical to any investigation. One rebel commander said his troops salvaged the Boeing 777’s black boxes (while another said they didn’t have them).

Rebels can be seen picking through the rubble in photos. A rebel unit blocked a team from the Organization of Security and Cooperation in Europe (OSCE) from entering the site, even firing a warning shot at them. Worst of all, eyewitnesses said rebels stole 36 bodies from the crash site and were taking them to Donetsk. Read more at The Guardian.