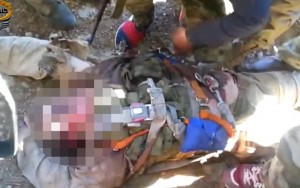 Turkmen rebels are claiming they shot and killed two Russian pilots who ejected from a jet shot down by the Turkish air force over the Syrian border.

“Both of the pilots were retrieved dead. Our comrades opened fire into the air and they died in the air,” a deputy Turkmen brigade commander, Alpaslan Celik, told Reuters.

Videos online purport to show rebels gathered around the body of one of the pilots, yelling “allahu akbar!” WATCH THE VIDEO HERE.