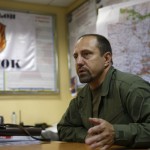 Alexander Khodakovsky told Reuters that the rebels had a Buk missile system and that they may have gotten it from Russia. However, he blamed Ukraine for provoking the strike and claimed the country knew rebels had access to the Buk.

“The question is this: Ukraine received timely evidence that the volunteers have this technology, through the fault of Russia,” he said. “It not only did nothing to protect security, but provoked the use of this type of weapon against a plane that was flying with peaceful civilians.”

Rebels using anti-aircraft weapons have shot down five planes, including MH17, in the past week. Read more.