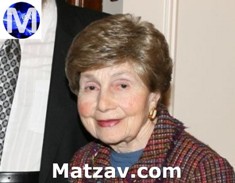 It is with great sadness that we report the passing of Rebbetzin Faye Gittel Shisgal a”h, wife of Rav Eliyahu Moshe Shisgal zt”l, rosh yeshiva at Yeshiva Torah Vodaas in Brooklyn, NY. She was 92.

Rav Moshe Feinstein was a talmid of his father and learned in the yeshivos of Slutsk, Shklov and Amstislav, before being appointed rov of Lubań, Russia, where he served for sixteen years. Rav Moshe married his wife, Rebbetzin Shima Kustanovich, in 1920. Their first three children, Fay Gittel, Shifra and Rav Dovid, were born in Lubań. Their youngest, Rav Reuven, was born in America.

Under increasing pressure from the Soviet regime, Rav Moshe moved with his family to New York City in 1936, where he lived for the rest of his life.

Rebbetzin Faye Gittel married Rav Eliyahu Moshe Shisgal, a son of Rav Avrohom Yitzchok Shisgal, rov of Congregation Anshei Vilna. Rav Eliyahu Moshe Shisgal was a highly-regarded talmid chochom and a tzaddik who eventually assumed a senior position at Yeshiva Torah Vodaas. Rav Shisgal passed away in the prime of his life, at a young age, in 1973. He predeceased his great-father-in-law, who passed away in 1986. Rav Moshe and Rav Shisgal are buried near each other on Har Hamenuchos in Yerushalayim.

Rebbetzin Faye Gittel was a tzadeikes who carried on the legacy of her illustrious parents. She stood at the side of her husband and supported him with great devotion and sacrifice. Her husband’s petirah 40 years ago was devastating, but the Rebbetzin carried on with great gevurah and bitachon, and served as an inspiring role model to her family and all who knew her.

The levaya is currently being held at Mesivta Tiferes Yerushalayim, located at 145 East Broadway in Manhattan, New York. The aron will then be flown to Eretz Yisroel, where the kevurah is expected to take place on Har Hamenuchos in Yerushalayim.