Reb Nachman arrived at the Kanievsky home on Rechov Rashbam shortly before Maariv. He davened with the tzibbur, after which someone in the house recognized him and asked what he was doing in Eretz Yisroel. Reb Nachman said that as soon as he heard of the besurah, he decided to travel to Eretz Yisroel to be menachem the mishpacha.

Family members were curious as to why Reb Nachman deemed it necessary to trouble himself to make the arduous trip to Eretz Hakodesh just to be menachem avel. 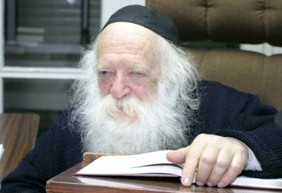 Reb Nachman related that during the shivah for his own son, Leiby z”l, Rav Chaim had sent a condolence letter to the Kletzky family – one of some 25,000 letters that he and his wife received from around the world – and Reb Nachman thus felt the need to reciprocate.

As first reported here on Matzav.com, following the tragic loss of Leiby Kletzky z”l, Rav Chaim Kanievsky penned a letter of chizuk to Leiby’s parents, Reb Nachman and Itta Kletzky. In the rare, six-line, handwritten letter, Rav Chaim, who is known for his brevity, offered his heartfelt condolences to the Kletzky mishpacha. A free translation of Rav Chaim Kanievsky’s letter follows:

It is with great grief that we heard of the tragedy that has transpired to you. We don’t understand the calculations of Heaven, and this is surely a cheshbon (calculation) related to the neshamah in a prior ‘gilgul.’ May Hashem comfort you among the mourners of Tzion and Yerushalayim, and may you see him [Leiby] upon techias hameisim, speedily.

While being menachem avel, Reb Nachman told Rav Chaim various incidents of people being mechazeik in emunah after Leiby’s petirah.

“Many people decided to be mechazeik themselves following the shocking murder,” Reb Nachman told Rav Chaim and the other aveilim, “and took upon themselves the ohl of Torah and mitzvos.

“During the shivah,” Reb Nachman related, “we received a letter from a fifteen-year-old boy who had degenerated into an abyss of crime and criminal acts. He was ultimately caught committing a crime and was sentenced to two years imprisonment. A few days after the murder of Leiby, we received a letter from prison. In the letter were four dollar bills and a note. The boy wrote: ‘Every day I receive a small allowance for food and cigarettes. When I heard of the shocking murder of Leiby, I decided to give up the money and donate it for an aliyah for the neshamah of your son. In his zechus, I will put on tefillin, will try to be shomer Shabbos, and will try to return to the right path'”

During the conversation, Rav Chaim said to Reb Nachman, “We do not know the cheshbonos of the Ribono Shel Olam. Iy”H, you should be zoche to see additional children in this world. And I am certain that [Leiby] was a gilgul of a very lofty neshamah.”