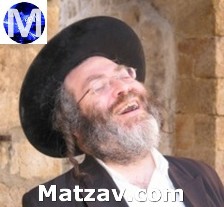 It is with great sadness that we report the passing of Reb Chaim Daskal of Yerushalayim zt”l, known as “Reb Chaim of Yerushalayim,” one of the great mekarvim of our time who influenced thousands of people to draw closer to their heritage and to theRibono Shel Olam. He was just 52 years old.

Thousands were touched by his Shabbos campaigns, as he and his wife were moser nefesh to offer Jews of all types, from all over, a taste of Shabbos.
In 1972, at the age of 10-1/2, Reb Chaim joined the Mirrer Yeshiva in Flatbush, Brooklyn, where he was greatly influenced by the beloved Rabbi Avi Lieberman zt”l, who inspired Reb Chaim, showing him the sweetness of Torah learning and tapping into his potential. Reb Chaim later dedicated every success of his to Rabbi Lieberman, who was known to Reb Chaim and his fellow talmidim simply as “Reb.”

Rabbi Lieberman enabled Reb Chaim to formulate a method for teaching children – and adults – to love learning. By age 16, Reb Chaim began studying at Yeshiva Bais Yehuda in Southfield, Michigan. The local day school let out at 3 p.m. and many boys were just hanging around, so Reb Chaim organized an after-school program from 3:15 to 4:30. Following that project, with the help of friends from the yeshiva, Reb Chaim built a very successful model of Pirchei Shabbos programs. Ultimately, Reb Chaim became a teacher, principal, mentor and life-coach to literally thousands of students all over the globe.

Reb Chaim was always proud that he descended from the Baal Shem Tov, and that his family descends from Dovid Hamelech, 95 generations from Nachshon Ben Aminodov.

After Reb Chaim’s zaida, Rav Boruch Yehuda Lebovits zt”l (after whom he was named) passed away at a young age, his grandmother, Rebbetzin Yentel, married Rav Eliezer Zusia Portugal, the Skulener Rebbe zt”l. Reb Chaim became very close to his grandfather, the Rebbe. He frequented his home and it became his home away from home. Reb Chaim spent many hours studying with the Rebbe and observing the many acts of loving-kindness that made him so well-known throughout the world.

Reb Chaim’s uncles – Rav Naftuli, the Holosher Rebbe, the Krumbacher Rebbe, the Nikolsburger Rebbe and the Karmarneh Rebbe; Reb Mordechai, the Bishtener Rebbe; and Rav Yitzchok – and his aunts, Rebbetzin Chaya and Rebbetzin Devorah, had a big influence on his life.

The specialness of Reb Chaim of Yerushalayim, as he was known, was his ability to reach out to all Jews of all walks of life. He was always the first person to greet someone and share a smile.

In his early years, when he lived in Minnesota, and he helped so many people, and later in Yerushalayim, where he hosted Shabbos meals in the Old City, Reb Chaim was a gatherer of souls. He was a master at understanding all types of people and seeing what they needed.

He encouraged children to learn Mishnayos by heart and to study Torah. Dozens of young married couples went to him for advice and encouragement. When he entered a room, people took notice and wanted to know who this person was. There was a light about him that shone with gladness and kindness.

Reb Chaim will always be known for his holy Shabbos meals, which were open to all types of people. He taught young and old to appreciate the light of Shabbos through singing and Torah. In many cases, he changed people’s lives forever and gave them an experience of Eretz Yisroel that they would never forget.

The world is a darker place without Reb Chaim and his contagious simcha and smile, but his legacy lives on, warming the hearts and souls of so many, inspiring them to keep rising in ruchniyus, just as Reb Chaim would want.