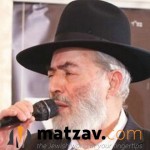 It is with great sadness that Matzav reports the passing of Reb Binyomin (Benny) Hershkowitz  z”l. He was 65.

Reb Benny was a renowned composer of Jewish music, most famously composing the popular niggun for the words “Ein Aroch.” Reb Benny composed many songs sung by singer Michoel Streicher, including Ein Aroch.

The song was famously a favorite of Maran Rav Yosef Shalom Elyashiv zt”l, who enjoyed humming the tune to himself while learning. Michoel Streicher once earned the rare opportunity to sing the song for Rav Elyashiv at his home.

Reb Benny had originally composed the song to the words “Lanu ulechol nafshasana.” It was Michoel Streicher who matched the song with the words of Ein Aroch, from Shabbos Shacharis (Nusach Sefard). The song became renowned worldwide, being sung by chazzanim, in shuls, and at weddings, a virtual Jewish music classic.

Reb Benny released an album of his songs performed by, among others, Mordechai Ben David, Yaakov Shwekey and Dudi Kalish, and he composed songs for singers Yeedle, Shlomo Simcha, and others.

The levayah will be held on Erev Shabbos in Beit Shemesh, where the kevurah will take place.

LISTEN TO EIN AROCH BELOW: