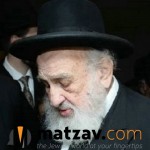 It is with great sadness that we report the passing of Rav Yosef Diskin zt”l, who passed away at Maayanei Hayeshuah Hospital in Bnei Brak at the age of 87.

Rav Yosef was born in Russia, where his father, Rav Yehoshua Zelig Diskin, was the rov of Parislov.

As a child, Rav Yosef’s family immigrated to Eretz Yisroel and settled in Tel Aviv. His father was appointed as rov of Pardes Chana and became one of the most respected rabbonim in Eretz Yisroel, maintaining close relationships with the Chazon Ish, the Brisker Rov and the Ponevezher Rov.

As a bochur, Rav Yosef was one of the first talmidim of Ponovezh Yeshiva, together with his brother, Rav. S. M. Diskin.

Rav Yosef married a daughter of Rav Simcha Shapiro and shortly thereafter became a R”M at Yeshiva Tiferes Tzion, where he was marbitz Torah for decades, guiding thousands of talmidim in Torah and avodah.

Rav Yosef spent his life devoted to limud and harbotzas haTorah, and he was well-known for his wide breadth of yedios haTorah. He was also a giant in middos, carrying himself with gentility and humility.

The levaya was held Motzoei Shabbos from his house on Rechov Bais Shamai in Bnei Brak. Kevurah was held at the Ponovezher Bais Hachaim.