The well-known Rav Yoel Kahn, chozer for the Lubavitcher Rebbe and elder Lubavitcher talmid chochom, paid a visit to Maran Rav Chaim Kanievsky yesterday at his home on Rechov Rashbam in Bnei Brak.

During the half-hour visit, Rav Kahn spoke in learning with Rav Chaim, mostly on inyonei Chanukah.

“You came to Eretz Yisroel for Chanukah?” asked Rav Chaim. 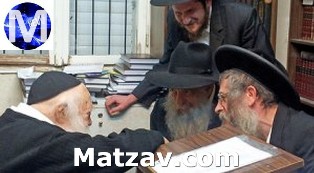 “We’re actually returning [to the United States] tonight,” said Rav Kahn, explaining that he had traveled to Eretz Yisroel for Yud Tes Kislev, the yom hageulah, or day of redemption, of the Baal Hatanya, the first rebbe of Lubavitch.