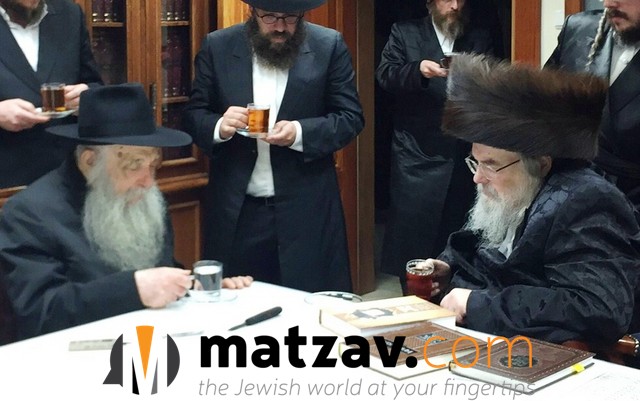 The well-known Rav Yoel Kahn, chozer for the Lubavitcher Rebbe and elder Lubavitcher talmid chochom of Crown Heights, Brooklyn, paid a visit to the Belzer Rebbe in Yerushalayim.

Although the Rebbe of Belz visited the late Lubavitcher Rebbe  twice, there was a sharp dispute between them regarding certain issues.

Rav Kahn and the Rebbe discussed various matters during their warm and cordial meeting.

Over the past few years, Rav Kahn has also visited Rav Aharon Leib Shteinman and Rav Chaim Kanievsky at their homes.

Rav Kahn recently traveled to Eretz Yisroel for Yud Tes Kislev, the yom hageulah, or day of redemption, of the Baal Hatanya, the first rebbe of Lubavitch.

The following is commentary on the meeting by COLLive:

A meeting between Rabbi Yoel Kahn, the preeminent Chabad scholar, and the Belzer Rebbe, Rabbi Yissachar Dov Rokeach, is being portrayed as an historic reconciliation between both chassidic communities.

People present at the encounter which took place on Motzoei Shabbos in the Belzer Rebbe’s home in Jerusalem said it was “very friendly.”

“There has been a disconnect between Chabad and Belz for 27 years, since 5748,” said Binyomin Lipkin, a Chabad author and editor of the Hamevaser frum daily newspaper, who coordinated the meeting.

He is referring to the national elections in Israel when incitement (sic) against Chabad and the Rebbe led the Litvish community to establish a rival party to the chassidic Agudas Yisroel. Belz sided with the Litvish party Degel Hatorah.

Belz have since returned to caucus with Agudah, but many refused to forgive them for helping split the frum community in Israel. In many Chabad homes, food with the Belzer kosher certification Machzikei Hadas isn’t welcome.

These strained relations were a far cry from the “great friendship between Chabad and Belz which was reflected in 2 Yechidus encounters of the Belzer Rebbe by the Rebbe in 5733 and 5741,” Lipkin said.

The second meeting, on 4 Adar II, 5741 (March 10, 1981), was held at 770 Eastern Parkway in Brooklyn, NY. After conversing for approximately an hour, the Rebbe escorted his esteemed visitor to the door.

During that meeting, the Rebbe told the Belzer Rebbe: “Your newspaper recently began to include chassidic teachings. If you are now providing the laymen with regular doses of chassidus, perhaps it’s also time to provide the yeshiva students with regular study sessions in chassidus. Many important innovations have been introduced in our generation, for when new ‘illnesses’ arise, new ‘medicines’ must be administered.”