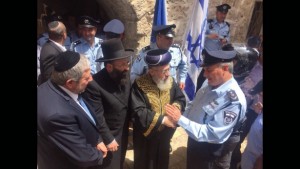 “If everyone would learn Torah, we would not need police,” said Sefardic Chief Rabbi of Israel Rav Yitzchak Yosef.

The comment was made during a speech at the inauguration of a new police station on Har Tzion near the kever of Dovid Hamelech.

In attendance at the event were numerous dignitaries, including Rav Shmuel Rabinovich, rov of the Kosel and mekomos hakedoshim; Police Chief Yoshanan Danino; Yerushalayim District Commander Moshe (Chico) Edery; as well as Christian clergy, police officers, and numerous others.

Rav Yosef described the passing of Dovid Hamelech and said that the study of Torah protects all of Klal Yisroel from troubles and suffering.

He said that if all of the Jewish nation studied at talmudei Torah and learned about yiras Shomayim, there would hardly be a need for a police force in Israel.

“It is rising crime and other such things that require the opening of a police station on Har Tzion,” he said.

He added: “The opening of a formal police station on Har Tzion shows the world that this place, Har Tzion, belongs to Jews, has belonged to us in the past, and will always belong to us, without argument.”

Police Chief Yochanan Danino remarked, “The Western Wall Unit is a special unit that is responsible for one of the most sensitive places in the world, especially to the Jewish people. It is a place that has a history of thousands of years and a symbol for many generations of Jews. We are inaugurating today a new station on Har Tzion that will operate 24 hours a day, 7 days a week, throughout the Old City. ”

PHOTOS FROM THE EVENT: