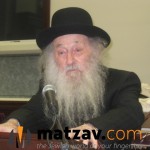 It is with great sadness that we report the passing of Rav Yechiel Nisselbaum zt”l of Brooklyn, NY.

When the Chofetz Chaim passed away, Rav Yechiel had returned home to assist his widowed mother.

Rav Yechiel attributed a brachah he received to his survival of Siberia. Radin was in Poland, but it was on the border between Russia and Poland. Rav Yechiel was on the Russian side, and when the Russians took over the area, they took all Polish citizens and sent them off to Siberia. It was the most difficult six months of Rav Yechiel’s life.

When the Russians entered the war on the side of the Allies, they set the Polish prisoners free and almost all of them made their way to Central Asia, where there was a warmer climate. Rav Yechiel traveled for weeks until he settled in Jallibad, a large central Asia city.

After surviving all those years of travail in Siberia and Central Asia, Rav Yechiel was finally able to leave Russia as a result of an agreement between Poland and Russia. The agreement dictated that all Polish citizens be repatriated to Poland. From there, Rav Yechiel eventually ended up with many other bochurim in France, where a group of bnei yeshiva had gathered. They lived together and waited for visas to the United States.

Rav Yechiel ultimately settled in the United States, where he raised a beautiful family of bnei and bnos Torah. He served for decades as the shamash of the Shomrei Emunah shul in Boro Park.

The levayah will take place today at 1:15 p.m. at Shomrei Hadas Chapels, located at 3808 14th Avenue in Boro Park, Brooklyn.

The Barnetsky, Kuperman, Judowitz and Lam families will be sitting shivah at 1122 52nd Street, between 11th and 12th Avenues in Brooklyn.