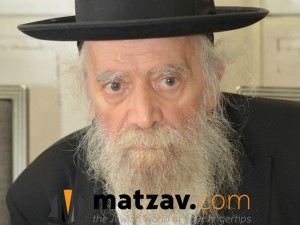 It is with great sadness that we report the passing today of Rav Yaakov Yosef Singer zt”l, rov of the city of Givat Shmuel, at the age of 76.

Rav Singer was born in Hungary on 7 Tishrei to his parents, Rav Yehuda Dov and Rebbetzin Chana Reizel.

At first, he lived on Rechov Ben Zakai in Bnei Brak. Over time, he moved to Ramat Elchanan, near Givat Shmuel. In recent years, he lived in Givat Shmuel and headed Mosdos Ziv HaTorah.

In his younger years, he learned at Yeshivas Ohel Shimon Erlau and was a talmid of the Erlauer Rebbe.

On 22 Iyar 13 years ago, his wife, Rebbetzin Malka Miriam, passed away. He is survived by six children, all of whom are married.

The levaya was held at the central shul on Rechov Bar Ilan in Givat Shmuel and then at the Erlauer Yeshiva in the Katamon neighborhood of Yerushalayim, followed by kevurah on Har Hamenuchos.