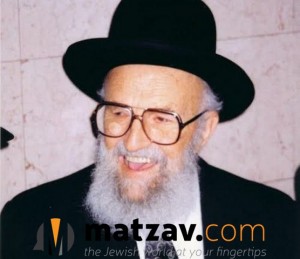 Rav Simcha Avrohom Sheps zt”l was born on April 18, 1908, in the Polish town of Vesokov-Mizivyetsk, near Lomza. Rav Simcha lost his father in early infancy and was raised by his mother and grandfather in the town of Sheptakova, where he spent his early years learning in the Sheptakova cheder. At the age of eleven, he went to learn at the Yeshiva Ketanah of Brainsk, after which he learnt in Lomza until his bar mitzvah.

Young Simcha greatly desired to learn in the great Lithuanian yeshivos, but he was afraid to broach the subject with his widowed mother, so he approached his grandfather with his wish. His zaide, who ran an inn in Sheptakova, thought that it would be best to get advice from the bochurim who often stayed by him when they transferred from their respective yeshivos to the Mir. Young Simcha returned to Lomza and waited for his grandfather to call on him.

After a while, he got an urgent message to come to the inn. When he arrived, he met a group of bochurim who were on their way from Kaminetz to the Mir. At the urging of his zaide, he asked them a difficult question on the sugya he was learning. (Rav Simcha later related that this question, which had stumped the roshei yeshiva , was ultimately found to be asked by the Boruch Ta’am.)

A bochur named Elya Chazan, who seemed like the leader of the group, immediately provided two brilliant answers. He saw that the young boy standing before him had tremendous potential and gave him advice on how to convince his mother to allow him to go to a higher level yeshiva.

Several years later, upon his arrival in the Mir, Rav Simcha encountered some members of the group he had met in his grandfather’s inn. They re-introduced him to Elya Chazan, who immediately said, “I have another two answers to your question!” At the shivah of Rav Elya Chazan zt”l, Rav Simcha said that Rav Chazan was from a bygone era, when a question on a sugya really bothered bochurim and captured their complete attention.

At the age of thirteen, Rav Simcha received permission to travel to Baranovitch to learn under Rav Elchonon Wasserman zt”l, Hy”d, and Rav Dovid Rappaport zt”l, Hy”d. After an exhausting train ride that dropped him off at the other end of Baranovitch, thirteen-year-old Simcha arrived at the yeshiva tired and weary. He was told by the mashgiach, Rav Yisroel Yaakov Lubchansky zt”l, that the yeshiva was full to capacity and could not accept him.

“Then I won’t eat with the other bochurim. I’ll take care of myself. Just please let me learn,” Rav Simcha begged.

The mashgiach allowed Rav Simcha to enter the yeshiva, and true to his word, Rav Simcha did not take part in the yeshiva’s meals, remaining immersed in learning in the bais medrash. Rav Simcha later recalled with tears in his eyes, “I would go to the garbage and take out the potato peels, which I ate together with scraps from other bochurim’s plates.”

After some time, the mashgiach caught Rav Simcha searching through the garbage can and invited him to eat all three meals in his home.

Rav Simcha learned in the Mir from the age of sixteen until World War II (except for 1936-1937). While in the Mir, he was close with Rav Chaim Shmulevitz zt”l, Rav Aryeh Leib Malin zt”l, and Rav Yonah Minsker zt”l, amongst others. Being a penniless orphan, his years at the Mirrer Yeshiva were a period of supreme mesirus nefesh for Torah.

Once, Rav Leizer Yudel Finkel zt”l caught him tutoring an American bochur for a small fee. Rav Leizer Yudel immediately said, “I forbid you to spend your time tutoring. You should use this time to be mechadeish chiddushim.”

Rav Leizer Yudel once said about Rav Sheps, “You can awaken Rav Simcha at any time of the night to ask him the lomdus of any sugya in Shas, and he will tell it to you.”

Rav Leizer Yudel began learning with him throughout the night every Wednesday. In exchange, he would give him a stipend based on the “value” of the shtickel Torah he related. Rav Simcha would not sleep on Tuesday nights, as he spent hours preparing a vort for the rosh yeshiva for the following night.

Years later, when Rav Sheps visited Rav Chaim Shmulevitz in Yerushalayim, Rav Chaim showed him his daughter, Rebbetzin Ettel Partzovitz, wife of Rav Nachum Partzovitz zt”l, and declared, “Ihr zent shuldig fahr ihr ah sach shloff (you owe her a lot of sleep)!” He explained that during the period when Rav Simcha would learn with Rav Leizer Yudel, they would at times awaken his young daughter due to the rischa de’Oraisa. Rav Simcha immediately apologized for this.

In 1934, Rav Simcha was chosen from among the talmidim of Mir to go to the city of Brisk and join an elite group of talmidim to learn with the Brisker Rov, Rav Yitzchok Zev Soloveichik zt”l. He demurred, saying that he felt that it was not right for him to be part of the same group as Rav Yonah Minsker, who Rav Simcha looked up to for guidance when he first entered the Mir. When the offer was repeated in 1936, he accepted and spent two years in Brisk together with Rav Henoch Fishman zt”l and Rav Naftoli Wasserman zt”l, Hy”d, Rav Elchonon Wasserman’s son. These years shaped his derech halimud and outlook on life, and he considered the Brisker Rov to be his rebbi muvhok.

In 1939, while stationed in Japan with the rest of the Mir, Rav Simcha miraculously received a visa and immigrated to the United States. Upon his arrival in New York, he joined the staff of Yeshiva Torah Vodaas. During this time, he developed a lifelong relationship with Rav Moshe Feinstein zt”l and Rav Eliezer Silver zt”l.

In 1942, he married his rebbetzin, Sora Weitzman, daughter of the rov of one of the biggest shuls in Brownsville. Rav Shlomo Heiman zt”l escorted him to his chupah. When Rav Heiman became ill in 1943, Rav Simcha took over his shiur at Yeshiva Torah Vodaas. Many have credited him with being the first to bring the Brisker derech halimud to the yeshivos on these shores.

During the forty-eight years that he was marbitz Torah at Yeshiva Torah Vodaas, he was afflicted with life-threatening illnesses on a regular basis. One year, Rav Yaakov Kamenetsky approached Rav Simcha before Yom Kippur and told him, “Rav Simcha, I’m aware that you suffer from many serious medical conditions. I am certain that if the Chazon Ish had your symptoms, he would eat on Yom Kippur.”

Rav Simcha thought for a minute and replied, “For the Chazon Ish, every single day was like Yom Kippur. I only have one Yom Kippur and I cannot give it up so easily.” For many years, Rav Sheps monitored his sugar levels carefully and managed to fast the entire Yom Kippur, his medical issues notwithstanding.

Despite his poor health, he delivered shiurim with vim and vigor, displaying his sheer exuberance for Torah as it came to life with his delivery. He was known for his bren for learning, and despite his health issues, he was moser nefesh to deliver his shiur. He conveyed to his talmidim a sense of urgency and mission for Torah learning that can still be seen in his students to this day. The thousands of talmidim who learned under him acknowledge that the excitement they have for Torah is an extension of Rav Simcha’s excitement for learning.

Rav Simcha was niftar on 16 MarCheshvan, 5759, and was laid to rest on Har Hazeisim. During the subsequent years, his talmidim and family, who wrote the drashos and shmuessen that they heard from him, printed them in a sefer called Moreshes Simchas HaTorah. In 5759, his shiurim on Maseches Bava Kama were printed by his family in a sefer called Divrei Simcha. His legacy lives on through his shiurim and seforim.