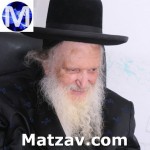 Rav Moshe Shternbuch has resigned from his position as the rosh av beis din of the Eidah Hachareidis in Yerushalayim, Matzav.com has confirmed with one of the rov‘s close talmidim.

Rav Shternbuch’s resignation comes in the wake of controversy surrounding the Golventzitz construction project in Beit Shemesh. Rav Shternbuch conducted an extensive investigation and ruled decisively that the construction is permitted and there is no concern of building on kevarim in that location. The decision sparked shameful attacks from irresponsible individuals who engaged in a campaign that involved blatant bizayon haTorah.

Rav Shternbuch resides in Har Nof, where he is the rov of the local Gra Shul. He is a direct descendant of the Vilna Gaon.

Born in London, England, before World War II, he was orphaned at an early age. He attended Yeshiva Toras Emes in Stamford Hill, which was led by Rav Moshe Yehuda Schneider, before learning in Yeshivas Brisk. He also learned with Rav Bezalel Rakow, later to become the Gateshead Rov.

Rav Shternbuch subsequently took up a position in Johannesburg, South Africa, where he was widely acclaimed for his rabbinic leadership and shiurim to Jews from across the spectrum. He then moved to Eretz Yisroel and assumed his senior position at the Badatz of the Eidah Hachareidis in Yerushalayim, from which he has just departed.

Rav Shternbuch will henceforth be known as Raavad of Yerushalayim Ihr Hakodesh.