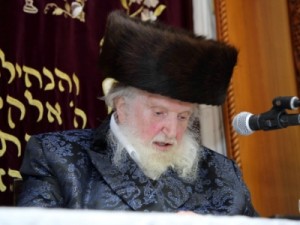 The Raavad of Yerushalayim, Rav Moshe Shternbuch, in a shmuess last night at his yeshiva gedolah in Ramot, discussed the tragic earthquake in Nepal that has claimed thousands of lives and has displaced tens of thousands.

“This week, we heard that in a distant country, Nepal, there was an earthquake.” he said, “For many, their own homes became graveyards. Thousands of people – men, women and children – were killed. Some are even fearful of the quake coming here, to Eretz Yisroel.”

Rav Shternbuch continued: “We know that whatever Hashem does in distant lands is to inspire and impact Klal Yisroel. Therefore, we must open our hearts and think about what has occurred in this distant country.”

Rav Shternbuch took out a Medrash on Tehillim and read the words of the Medrash on the posuk of “ותגעש ותרעש הארץ.” The Medrash there says that for sins of immorality – such as non-traditional marriage – Hashem becomes “angry.” and “the earth will shake and the mountains will smoke.”

“According to the Medrash,” said the Raavad, “we are to view this earthquake as a warning from Heaven to do everything we can to prevent the desecration of Hashem’s name via the proliferation of this transgression [of immorality]. Indeed, Hashem, in His great mercy, did not bring the punishment upon us, but in order not to forget the notion that there exists the terrible punishment of an earthquake for this transgression, Hashem sent us a warning in a country far away to remind us that this penalty exists.

“We are therefore obligated,” added Rav Shternbuch, “to protest day and night those who promote and perform conversions to Judaism without kabbolas ohl mitzvos and according to secular law. These people then marry Jews. They are bonafide non-Jews. And those who marry them commit a severe sin and Hakadosh Boruch Hu removes his Presence from amongst us. If Hashem hears us protest, then His anger won’t be taken out against us.”