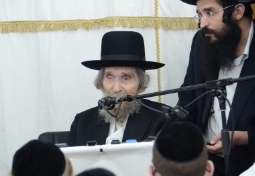 “As Yom Kippur approaches, we have to be mechazeik ourselves and stay away from leitzanus (levity)”, said Rav Aharon Leib Shteinman in a shmuess this week at his yeshiva, Yeshiva Orchos Torah, in Bnei Brak.

In the past, Rav Shteinman would frequent yeshivos during the Aseres Yemei Teshuvah to share words of hisorerus, but because of his weakness, he has only visited the yeshivos of Orchos Torah and Gaon Yaakov.

However, he asked his grandson, Reb Gedaliah Honigsberg, to share with the talmidim of Yeshiva Shaarei Torah and other yeshivos in his name that “care should be taken in shemiras halashon, especially in abstaining from speaking leitzanus.”

Rav Shteinman explained: “Many times, bochurim have been very strong in learning and other matters of avodas Hashem, but the spirit of leitzanus enters them and destroys them completely. There was one boy who learned with me at Yeshiva Toras Chesed in Brisk. He was a big yorei Shomayim and baal mussar, but suddenly he was consumed by leitzanus and lost all his mussar, and he experienced a steep moral decline.”