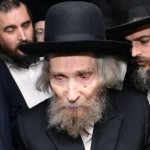 Rav Aharon Leib Shteinman was hospitalized after feeling unwell on Motzoei Shabbos, it has been revealed. He was taken to Mayanei Hayeshuah Medical Center in Bnei Brak for tests and then released several hours later.

Due to Rav Shteinman’s advanced age of 101, doctors expressed concern about his rigorous schedule and minimal rest. They directed for his schedule to be curtailed during the coming days to allow him to rest and recover.

All are asked to daven for Rav Aharon Leib ben Gittel Faiga.